I love ConstantCon and FLAILSNAILS. However moving between silver standard and gold standard worlds is seriously handicapping poor Zaunn, as all his G.P. become S.P. but don't convert back again. This is particularly on my mind as I work on my Fort Flaime 'megadungeon' that I hope to run as a FLAILSNAILS game and I find that I can't decide between the two standards.

The problem appears to me to be, as with the conversion of currency in the real world, the perceived value. In OSR games value is short-handed into the metal each coin is made from. But this seems faintly ludicrous for the purpose of FLAILSNAILS. I feel that the inherent value of the coins should remain roughly the same when moving between FLAILSNAILS worlds. Inherent value is measured in buying power, that is how much you can buy with them. In Jeff Rient's Wessex, a Gold Standard setting, a single gold coin buys exactly the same as a single silver coin does in Evan Elkins's Dark Country, a Silver Standard setting. 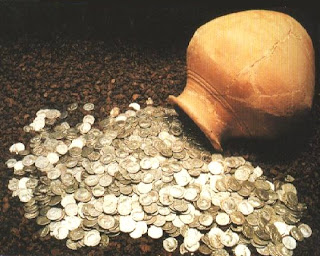 Here's the coinage I intend to use in Fort Flaime:

The thing that struck me as I wrote this, even though I'm pretty sure flies in the face of economic wisdom, is that Silver Standard settings are fundamentally better off. It seems to me that Gold Standard settings must be fairly resource-poor for common items to cost ten to twenty times more (going by the common OSR conversions between gold and silver pieces) than in a Silver Standard setting.
Feel free to comment, hurl criticisms or rotten fruit.
Posted by PlanetNiles at 04:58