I'm still working on my homebrewed fantasy heartbreaker. Although it's gone from being a house-ruled version of B/X to something else. I might write about it, and my other projects, later.

What I want to write about today is the research system I think I developed; my memory isn't what it was. It's a d6 based system but 1d6, while I've gone onto using a 3d6 system for the bell curve. While I'm still planning on keeping the core of the system with its stages of development, the core die mechanic is going to change. This means that the old version, this version, is orphaned. So I thought I'd share.

It all starts with intelligence: 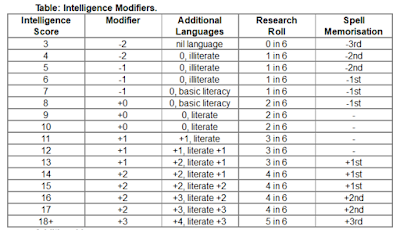 This is the number of additional languages a character begins play with. It also dictates their initial literacy. See Research Roll below to discover how to learn languages in play.

This is the chance on a d6 for a character to learn a new spell or do magical research. It can also be used to learn new languages. Among other things.
In general a roll to do research, or learn something new can happen once every set period of time, possibly with some extra cost or some-such.
If there is a research penalty applied to the roll then one starts at the intelligence score of one’s character and then counts down. So an INT 10 character with a -2 penalty would roll as if they were INT 8; which remains a 2 in 6 chance anyway. More about spell studying and research can be found in the chapter on Magic & Spells below.

There are three stages to learning a new spoken language, each of which takes a month of game time during which the character should be exposed to the language in question on a daily basis. The character is able to do other things, including adventuring, during this time. Difficult languages or writing systems should have a research penalty to learn.
After a month and a successful research roll the character achieves Basic Fluency in the new language; they can speak a few key phrases, such as “Hello little girl,” “I speak your language very well,” “Which way to your mother,” “So is your face,” and “My flying carpet is full of salmon.”
After another month and successful research roll the character achieves Conversational Fluency. They are able to hold a conversation with a native speaker of the language well enough to make themselves understood. However complex topics are still beyond them.
Finally after a third month and successful research roll the character achieves Full Fluency, where they can speak the language like a native.
Literacy follows the same procedure, but only takes a week per roll. Literacy can be gained at the same time as fluency but cannot exceed a character’s fluency in that language.

All characters begin proficient in certain weapons, as by their character class description. Typically their starting weapon. When using a new weapon, in which they are not proficient, then they fight with a penalty of -3. After a week’s practice with the weapon they can make a research roll and if successful the penalty drops to -2. With each additional week’s practice and successful research roll the penalty reduces by a point until it reaches zero, at which point the character is proficient with that weapon.
Fighters and Outlanders have their own methods of developing weapon proficiencies and do not need to make research rolls to do so.

These are bonus spells that a character who can cast Arcane spells can add to their repertoire. These modifiers stack so a character with an INT of 15 would be able to memorise an additional three extra first level spells.

That gives a brief foundation in what's going on. The core column in this case being the research roll. Next onto the meat of the system.:

If and when a magic using character finds a new spell from some source and are able to study that source it is a relatively easy thing to learn to use the spell themselves. If the source is something like a spell book or grimoire that the character is able to readily read then they get to make a research roll every game time day of study (including a good night’s rest). If the source is a book that the character is unable to readily read, perhaps because it is in a foreign language or is in some way encoded then they must first decode or translate it into some readily readable form. This may require additional adventures.
If the spell is from esoteric source, such as a standing magical effect, an anomaly, a magic item or similar then first the character must use the Spell Research rules below to research the effect so that they can develop enough of an understanding of it to study it as a spell. Although with a bonus to the research. In the case of a standing magical effect or anomaly this will require setting up a laboratory at the site. More portable effects can be taken to previously established facilities for study.
In any regards spell study carries a research penalty equal to the level of the spell being studied. A failed roll just means that the time spent studying was wasted, or the character was distracted. There’s nothing stopping them returning to their studies tomorrow.

If a magic using character wishes to create a new spell, item or similar they must first research it. There are three stages to research: Breakthrough, Experimentation and Completion.

The magic user must first make a number of successful breakthrough rolls equal to the level of the spell being researched. Each breakthrough takes one week of game time to research, and costs 100sp per week, outside of other costs. A failed roll for a breakthrough just wastes the time and resources put into that week’s research.

Once they have made sufficient breakthroughs the magic users moves on to experimentation. Again they must make a number of experimentation rolls equal to the level of the spell that they are researching. These each take a day of game time and cost 10sp per level of the spell being researched. A failed roll represents a setback which forces the magic user to go back and make another breakthrough to counter it. Thankfully any time spent experimenting counts towards the week making the new breakthrough.

When they have finally made all their breakthroughs and experiments the magic user can finally move onto codifying and recording their discovery. This takes one game week of time and costs 100sp per level of the spell. A successful roll leaves the magic user with a collection of their research notes, the spell memorised and copied into a format that they, or another, can use to memorise it in the future. A failed roll means that the magic user has wasted the time and money without getting anywhere.

Reconstructing a spell from a magic user’s completed research notes (their own or another’s) just requires going through the completion stage again. However a failure here means that the magic user fails to comprehend the notes and they are pushed back to the experimentation stage. A successful experimentation roll returns the magic user back to the completion stage while a failure has its normal result.
This is also the case if the research notes are incomplete and come from another magic user, or more than a year has passed since the magic user last worked on the research. But here the completion roll takes a day, cost nothing but time, and reveals where the notes end. Success permits the magic user just continue where their peer left off. Failure counts as a setback. Magic users who have taken a brief break (less than a year) from their own work don’t have to make this roll.

In some circles spell casters are expected to share their findings with their peers. Of course said peers don’t just want to see the finished product they want to see the workings too. This takes them a number of hours equal to the level of the spell and a single research roll. This roll gets a bonus to their intelligence for each level the spell is below the maximum level they can cast. It is penalised for each level above the maximum level they can cast and by each setback that was encountered during research. Failure here means that they can’t comprehend (nor learn) the spell in its current format (the fools!). This will require the researcher to make a further completion roll before they can attempt another review.
Posted by PlanetNiles at 03:19