So I decided to go with the Great Campaign Idea. It's more traditional and I can always spin off my Celestial Door campaign later. So here is the Atlas map I generated using Welsh Piper's hex map generating system and template in Hexographer. 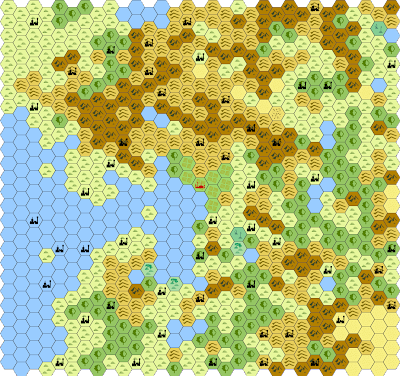 It's about 1125 miles to a side, with each hex being 25 miles wide. I've designated this as the players map, hidden all the details except the major settlements and the terrain. I've not placed the rivers yet but I have a good idea where many of them will be. I've also not placed farmlands anywhere except around the Great City (the red settlement towards the middle). That's because when you change the terrain type in a hex you delete the icons in it too. Ideally I'd convert all plains within two hexes of a city into farmland (inspired off of the settlement patterns on page 286 of the good-old WHFRP rules produced under license by Hogshead back in 1995). Of course in the Regional maps I'm working on I've begun to do that anyway.

Those settlements that appear to be in the middle of sea hexes will be on islands or on the coast once I've got around to doing those regions. At every step I'm letting the dice guide me. I find it quite liberating.

I'm planning on running the Tower of Zenopus for my family when I start the campaign, or rather I plan on giving them lots of rumours towards the tower. The only thing I can't decide is if I want to start them in the Great City proper of that city south of it down the coast. The one which is a complete blank slate for me so far. The problems with the Great City is its size and the amount of additional rumours I'd have to come up with to breathe life into it. The southern city will require both more and less work since there is less of it done but I can do just enough instead of wallowing in the details inherited from the pre-generated metropolis. What you can't see from this map is the southern city is right on the border of its region meaning more mapping. C'est la vive.
Posted by PlanetNiles at 15:39